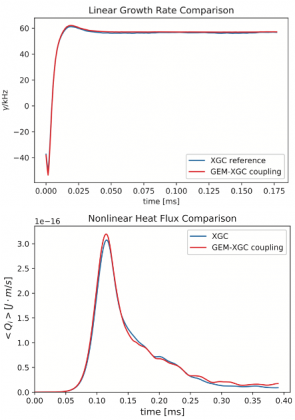 Two existing particle-in-cell gyrokinetic codes, GEM for the core region and XGC for the edge region, have been successfully coupled in toroidal geometry, using a suitable spatial coupling scheme at the interface.

Spatial core-edge coupling is the first step toward building a. first-principle-based Whole Device Model (WDM), a critical need for predicting the phenomena of future fusion facilities such as ITER

Computational Whole Device Modeling (WDM) is a critical need for understanding next-generation fusion experiments such as ITER, whose range of operating conditions are not achievable today. The modeling requires solving mutli-physics, where phenomena on different length and time scales are relevant. The Exascale Computing Project’s (ECP) WDMApp team is building a first-principles solution by coupling multiple applications, each of which solves a different regime of the physics. The first step is spatial core-edge coupling; here, we present successful measurements for an algorithm to couple the edge-code XGC with core-code GEM. In the overlap region, the composite distribution function solution is constructed as a linearly weighted average between the two regimes and requires and exchange of charge density and electric potential data between the two applications, which is implemented through memory-to-memory transfer. Because XGC and GEM use different meshes, interpolation is also needed, which is implemented in a linear field-following manner. Our results verify that the coupled solution is consistent with the XGC-only reference solution, that is, a more computationally intensive simulation in which XGC is used in the entire plasma volume.