The evolution of the peridynamics co-authorship network 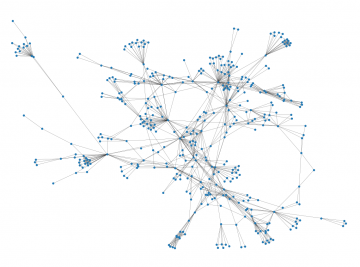 This work presents a comprehensive and in-depth study of the collaborative dynamics of the field of peridynamics from its inception by constructing and analyzing networks that represent the scientists and their collaborations in the field.  The study employs network analysis techniques (including advanced current flow centrality metrics) and persistent homology to: (1) characterize the global evolution of the peridynamics co-authorship network, (2) rank scientists in the field based on their collaborative profiles, and (3) provide suggestions for future collaborations between scientists in the field based on link recommendations.

To the best of the authors’ knowledge, this work represents the first analysis of the collaborative dynamics of peridynamics, an emergent field in continuum mechanics. Peridynamics originated from a paper published in 2000 and has since grown to encompass hundreds of researchers around the world. While there have been previous works studying the evolution of collaboration networks, fewer works studied the complete development of a new research field.  Because the field of peridynamics is relatively young, tracing its growth can yield great insight into how the collaborative dynamics behind new research fields develop.

This work provides a thorough investigation of the complex underlying collaborative dynamics in peridynamics (not only at the global community level, but also at the local level of individual scientists and groups of scientists) and presents strategies to identify potentially productive future collaborations. The analysis presented in this work could provide means for the comparison of the collaborative dynamics between different fields.

We also analyzed the peridynamics co-authorship network at a local level, ranking the nodes of the ``core" based on different centrality metrics. No single ranking is authoritative, though a composite ranking can be constructed in an attempt to determine the most collaborative scientists in peridynamics according to selected metrics. We employed two classes of centrality metrics: degree centrality and current flow centrality. The former only considers nodal properties (number of co-authors and number of co-authored publications), whereas the latter utilizes the structure of the network by accounting for all the paths that either start or end at a node or pass through a node. We observed that many of the same names appeared as top ranked scientists for the different metrics, although the order varied depending on the metric used. We employed a composite centrality metric to obtain an overall ranking for scientists for the different years, and we identified the ranking changes of those scientists between consecutive years. We further extended this analysis to higher-order networks to identify the most collaborative groups (pairs and trios) of scientists in peridynamics.