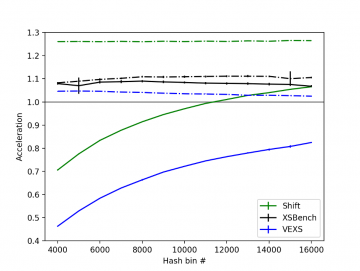 XSBench, VEXS, and Shift unit test simulations of a fresh scenario on a P100 GPU.

In Monte Carlo neutron transport simulations, a computational routine commonly known as “cross-section lookup” has been identified as being the most computationally expensive part of these applications. Unfortunately, the algorithms commonly used in the cross-section lookup routine were originally devised and developed for CPU-based platforms and have seen limited study on GPUs to date. Additionally, existing cross-section lookup implementations such as XSBench apply approximations which may have a negligible effect on CPUs but may be quite impactful to performance on GPUs given the more resource-limited nature of the latter. As a result, we have created VEXS, a new tool for modeling the cross-section lookup routine which removes or at least reduces the approximations made by XSBench in order to provide a more realistic prediction of algorithm performance on GPUs.

Monte Carlo neutron transport simulations are a powerful simulation method used often in the field of nuclear engineering to analyze scenarios of interest, such as reactor core design and radiation dose calculations. These codes have gained a reputation of being mostly “embarrassingly parallel”, however a specific routine which is common to all neutron transport simulations, the cross-section lookup routine, has been identified as composing a significant fraction of problem runtime. This routine has been found to be generally memory-bound, and often latency-bound in particular. Several algorithms have been developed to reduce the time-to-solution for these routines. These algorithms have had great success reducing computation time on their original architectures, CPUs, however they have not seen as significant study or even implementation on GPUs. VEXS (Very Easy XS) is a new tool for modeling the cross-section lookup routine on GPUs, which removes or reduces approximations existing in CPU-based implementations in order to bring performance prediction closer to those available from real-world production codes.