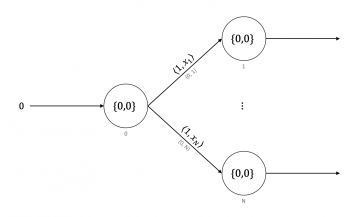 Neuromorphic algorithm for sorting a list of natural numbers. The numbers x_1 through x_N are encoded in the delays of synapses going from the source neuron (neuron 0) to the target neurons. The target neurons spike in the order of sorted numbers. This is a pseudo-polynomial time algorithm, i.e. it is linear in value of the inputs, but exponential in size of the inputs.
2021: Q4