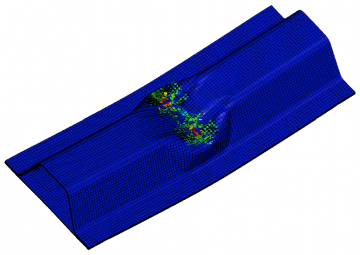 A finite element method (FEM) based peridynamic laminate model is developed to simulate the complex damage modes of fiber-reinforced polymer laminates. The model can represent both the elastic response and the progressive damage phenomena of laminates with arbitrary fiber orientations under dynamic loading, which is demonstrated through several numerical examples.

Fiber-reinforced polymer (FRP) components are extensively used by structural engineers, especially in the automotive and aerospace industries, due of the light weight and strong strength features of those components. The heterogeneous nature and unique geometric structure of laminate components lead to complex damage modes. The peridynamic model introduced in this work can model the complex damage modes of FRP laminates.

Damage prediction of laminate composites is a long-lasting challenge. The technical difficulties arise from the heterogeneity of the material and complex damage modes. The peridynamic theory of solid mechanics has the capability to capture the complex damage modes. This work presents a finite element method (FEM) based peridynamic fiber-reinforced polymer (FRP) laminate model for laminate structure simulation. The peridynamic discontinuous Galerkin weak form is build up from the strong form of the bond-based peridynamic governing equation. The laminate structure is discretized as an element-wise continuous mesh. The adjacent elements can split while crossing-elements bonds break. Consequently, the strong discontinuity of displacement fields can be represented autonomously. According to the unique geometric features of a lamina, the laminate is modeled as a sequence of surface meshes. This type of discretization not only evades the time step limitation due to the laminae thickness size, but it also has an advantage on delamination simulation. To avoid a dependency between the fiber orientation of a lamina and the computational mesh, the proposed model assumes that the micro-elastic modulus of a bond is a continuous function of the angle between the bond direction and the fiber orientation. Subsequently, the micro-elastic modulus can be evaluated from the engineering material constants based on an equivalent elastic energy density assumption between peridynamics and the classical elasticity theory. To capture the mixed in-plane damage and delamination modes, empirical critical bond stretch constants, which can control the breakage of different bond types under tension and compression conditions, are proposed. Several numerical examples are carried out to study the performance of the proposed model in terms of representing the elastic response and damage process of FRP laminate structures. The results demonstrate that this model can capture both the elastic response and the progressive damage phenomena of laminates with arbitrary fiber orientations under dynamic loading.

To predict the mixed damage modes of unidirectional fiber-reinforced polymer (FRP) laminates under dynamic loading, a finite element method (FEM) based peridynamic model is introduced in this work. Based on its geometric structure and material composition, a long fiber lamina is considered as a transversely isotropic medium as a result of homogenization at the meso-scale. The laminated structure is modeled by stacking surface mesh layers with arbitrary fiber angles along the thickness direction. The peridynamic bonds between Gauss points connect the separated elements to a continuous numerical domain. These bonds are classified as inner-layer bonds and inter-layer bonds. To represent the anisotropy of a laminate, the micro-elastic modulus of the inner-layer and inter-layer bonds is calculated from the anisotropic engineering material constants separately. To capture complex failure behaviors of laminate structures, an empirical damage model is proposed under the tension/compression breakage of peridynamic bonds. This damage model can control the in-plane and delamination failure process. Benchmark tests are conducted to validate the elastic response of laminates under dynamic loading. In terms of damage analysis, the proposed model can capture the complex damage modes and resistive force of laminate structures.