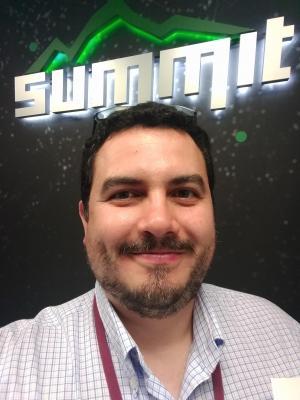 Dr. William F Godoy joined ORNL in 2016 as a Research Scientist in the Scientific Data Group, part of the Computational Science and Mathematics Division, CSMD.  A native of Peru, he holds all his degrees in Mechanical Engineering with a strong research and development (R&D) focus on the different aspects of scientific large-scale computational modeling and simulation.

Dr. Godoy obtained a BS (2003) from the National Engineering University (Universidad Nacional de Ingenieria, UNI) in his native Peru. He graduated with MS (2006) and PhD (2009) degrees from the State University of New York (SUNY) at Buffalo, working under the supervision of Dr. Paul E. DesJardin, an expert in turbulent combustion modeling, in 3D radiative transfer models for fire supression systems. Upon graduation, he joined the Science Directorate at NASA Langley Research Center for a postdoctoral appointment (2009-2012). At Langley, he developed 3D models to analyze radiative transfer in the atmosphere using NASA's Pleiades supercomputer and the novelty of GPU computing. Before joining ORNL, he was a staff engineer at Intel Corporation (2012-2016) in the Technology Computer Aided Design Group. At Intel, he worked on the R&D of large-scale thermal reliability models to support semiconductor design and fabrication of Intel's 22nm, 14nm (e.g. Haswell, Skylake, Knights Landing) technologies, and their future 10nm and 7nm successors.

Dr. Godoy is currently working on the research, architecture, and development of ADIOS2, the ADaptable I/O System version 2, as part of the Exascale Computing Project. His main motivation, being part of the ADIOS2 team, is to contribute to DOE's mission of advancing scientific discovery through HPC simulations by delivering a product that can adapt efficiently to satisfy data management needs at scale, and not the other way around.