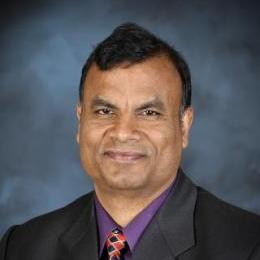 KALYAN PERUMALLA is a Distinguished Research and Development Staff Member and Manager at the Oak Ridge National Laboratory. Dr. Perumalla founded and currently leads the Discrete Computing Systems Group in the Computer Science and Mathematics Divisionat the Oak Ridge National Laboratory. He also serves as an Adjunct Professor in the School of Computational Sciences and Engineering at the Georgia Institute of Technology and as an ORNL Joint Professor in the Department of Industrial and Systems Engineeringat the University of Tennessee, Knoxville.

In 2015, he was selected as a Fellow of the Institute of Advanced Studyat the Durham University, UK. He has served on the National Academy of Sciences’ Technical Advisory Boards on Computational Sciences and Information Science at the U.S. Army Research Laboratory, 2015-2017.

Dr. Perumalla earned his Ph.D. in computer science from the Georgia Institute of Technology in 1999. His areas of interest include reversible computing, high performance computing, parallel discrete event simulation, parallel combinatorial optimization, scalable machine learning and artificial intelligence implementations, and computer-based modeling and simulation of large-scale man-made systems such as transportation networks, energy grids and cyberphysical systems. His notable research contributions are in the application of reversible computation to high performance computing and in advancing the vision of a new class of supercomputing applications using real-time, parallel discrete event simulations. High performance simulations spanning over 200,000 processor cores have been achieved by his algorithms and research prototypes on large supercomputing systems.

He has published his research and delivered invited lectures and tutorials on topics spanning high performance computing and simulation. His recent book Introduction to Reversible Computing(Amazon, CRC Press) is among the first few in its area. He co-authored another book, three book chapters, and over 100 articles in peer-reviewed conferences and journals. Five of his co-authored papers received the best paper awards, in 1999, 2002, 2005, 2008, and 2014. Some of his research prototype tools in parallel and distributed computing have been disseminated to research institutions worldwide. Dr. Perumalla serves as program committee member and reviewer for international conferences and journals. He is a member of the editorial boards of the ACM Transactions on Modeling and Computer Simulation(TOMACS) and the Transactions of the Society for Modeling and Simulation International(SIMULATION).