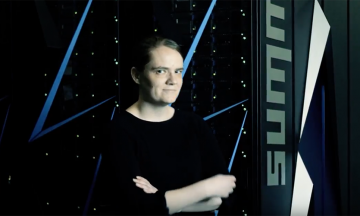 Katie Schuman wants to give neuromorphic computers brains and brawn.

If you try to visually represent a spiking neural network, a type of machine learning model, what you often get is an inextricable three-dimensional spiderweb of flashing dots and lines. This visual complexity masks a deeper dynamism, though, as the tangled mass is actually an ever-changing network of neurons and synapses inspired by the architecture of the human brain.

These networks, known as neuromorphic systems when implemented in hardware, are optimized over hundreds, thousands or even millions of iterations on powerful computers by researchers like Katie Schuman, a Liane B. Russell Early Career Fellow.

Katie is a neuromorphic computing researcher on ORNL's Nature Inspired Machine Learning Team, where she works to figure out what makes the human brain so powerful and how to leverage the theory of biologically inspired computing into practice.

"There's a lot to learn about what is possible with computing and with these systems," she says. "It's a paradigm shift in how we think about what computers can do."

Katie is interested in applying neuromorphic technology to edge computing, where data is computed at the point where it is collected, or the "edge," instead of being sent back to a core system or the cloud. Neuromorphic edge computing is best adapted for low-power systems like smart sensors, satellites, next-generation autonomous vehicles, wearable devices and coprocessors in future supercomputing systems.

"One of the things I like to say is that I use Titan, and hopefully Summit soon, to help understand how to build the computers of the future, whether that be future supercomputers or edge computers," Katie says.

"The Lab was always in my orbit," she says. "I always knew people who worked here."

Mathematics and computer science were the family business growing up: Katie's father is a math teacher and her brother, a programmer, first got her interested in computer science. Katie decided to double major in the two fields at the University of Tennessee, where she first encountered neural networks in a class on biologically inspired computing systems. She was especially interested in neural networks and genetic algorithms and wanted to explore the overlap of the two components.

During her doctoral program at UT, Katie worked with professors Doug Birdwell and Mark Dean, who first realized that the networks Katie had developed for her research could be built into efficient hardware implementations and started the team's work on neuromorphic computing.

The three collaborators used Katie's dissertation research to propel neuromorphic research at the university and co-founded TENNLab, a student and faculty research group dedicated to the design of computing systems based on the principles of the human brain.

"I entered the field just around the time when neuromorphic was becoming more and more popular," she says. "There was still a relatively small community of people working on it, so we were kind of able to get in on the ground floor there and get it started."

Katie earned her doctorate in 2015 and joined ORNL's Computational Data Analytics Group soon after. There were three major factors that made ORNL stand out in the computing community, she says. The first was the opportunity to work with the researchers in her group, who were already pioneering new frontiers in genetic algorithms and neural networks.

"We had a lot of overlapping interests and it seemed that there would be many opportunities to work together on big problems, so that shared excitement was one of the key features that drew me to ORNL," she says.

The second factor was ORNL's leadership in supercomputing and the chance to experiment on computing resources like Titan with people who knew how to best utilize their abilities. The final factor was the nature of ORNL that enabled ease of collaboration across disciplines.

"I wanted to be in an environment where there is lots of big science going on in lots of different disciplines, not just computing," Katie says. "I didn't want to be isolated in my own little world. I wanted to work with people from a variety of different fields, which is more easily done here than in academic environments."

"Neuromorphic is inherently collaborative," Katie says. "You can't stand alone in the software and algorithm side. We have to apply it to real world tasks to make a big impact."

One of Katie's goals is to build up the neuromorphic community both at ORNL and between institutions by organizing conferences and mentoring students who show an interest in the field. She says she was lucky to have a number of great mentors throughout her academic career, many of whom are now her colleagues, so she wants to pass along the same opportunities to others.

"Undergraduate research was such an important part of my path to where I am now," she says. "I decided I was going to have to do research because once I had gotten a taste of it I knew I wouldn't be happy doing anything else."

Katie's hope is that the up-and-coming researchers push the fledgling field into new areas, incorporating new innovations in hardware and software as the neuromorphic community expands and becomes more interconnected.

"I love working with students," she says. "It's one of my favorite parts of what I get to do because they're so passionate and excited about what's possible with research that it reinvigorates me in my own work." -- By Sean Simoneau