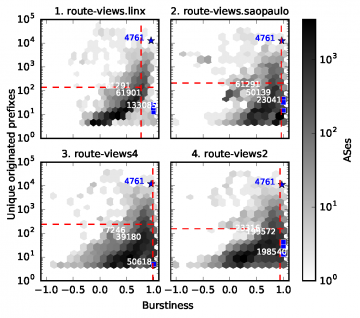 Joint distribution based on the burstiness (horizontal axis) and number of announcements (vertical axis) during one day interval around the Indosat incident (per collector). The AS represented by the star (i.e., Indosat) has among the highest burstiness, belonging to the first quadrant, which is even comparable to the top three burstiests ASes, marked with squares, that are placed in the fourth quadrant.

The Internet, although extremely robust, is notoriously vulnerable to attack by means of the Border Gateway Protocol (BGP). BGP update messages are assumed to be trustworthy. In other words, the reachability information shared between autonomous systems (ASes) is assumed to be correct without any verification. Despite the fact that the latest version of the BGP protocol was released in 2006, there are no inherent protection mechanisms against participants advertising false routes.

In practice, BGP lacks authentication mechanisms not only for the announcement of the origin of IP prefixes but also the paths to that prefix. This leaves BGP vulnerable to unintended misconfiguration and malicious attacks. The results of these disruptions include traffic blackholing and traffic interception. In traffic blackholing, the network traffic is dropped, never reaching its destination. In traffic interception, the announcing AS reroutes traffic for the victim IP prefix and redirects it to the original origin AS after interception. On this misdirected route, the traffic may be subject to eavesdropping, traffic analysis, or tampering.

Here, we propose an anomaly detection method that aims to identify incipient incidents before diffusion and harm by identifying a routing event as it emerges. Our goal is to identify anomalous routing events as soon as possible with respect to manually verified ground truth metadata, such as BGPMon, Oracle Dyn, and Ars Technica. Our ground truth sources manually investigate these incidents and determine its impact based on empirical measurements. A similar procedure has been used before for labeling purposes. To do this, we use control-plane data collected by RouteViews and served by BGPStream. The key observation in our anomaly detection method is that there are bursty BGP announcements as soon as new routes are adopted by neighbor ASes. We characterize bursty announcements through statistical analysis of inter-arrival times. We conduct a casebased systematic analysis of the changes of inter-arrival times that are associated with well-known anomalous events that resulted in traffic blackholing and intersection. We then propose a method based on control-plane information and statistical analysis to detect anomalous BGP announcements. We show that the proposed method is able to correctly identify the incidents in agreement with the ground truth while reducing significantly the number of false positives when compared with the volume baseline.

We illustrate the efficacy of leveraging RouteViews collectors’ infrastructure to identify anomalous routing incidents through the analysis of inter-arrival times of announcements. As a complement to current anomaly identification approaches, we have demonstrated a proof-of-concept that identifies real hijack incidents when these were detected in practice by leveraging the current RouteViews collectors’ infrastructure. We have characterized seven different incidents, including, large-scale and for traffic interception purposes from a different perspective, one derived by analyzing the patterns of burstiness of BGP announcements. The method detailed in this paper relies on the fact that large-scale disruption events produces groups of BGP announcements of relatively high frequency followed by periods of relatively infrequent events, which can be measured as burstiness. Relying on this observation, we describe a detection method that is able to indicate, from a collector point of view, when an incident is incipient.