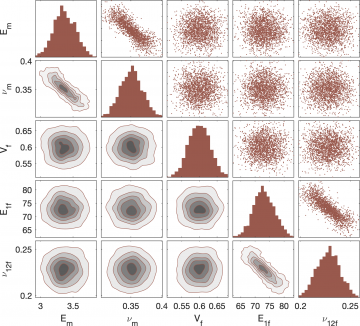 This paper addresses the problem of quantification and propagation of uncertainties associated with dependence modeling when data for characterizing probability models are limited. Practically, the system inputs are often assumed to be mutually independent or correlated by a multivariate Gaussian distribution. However, this subjective assumption may introduce bias in the response estimate if the real dependence structure deviates from this assumption. In this work, we overcome this limitation by introducing a flexible copula dependence model to capture complex dependencies. A hierarchical Bayesian multimodel approach is proposed to quantify uncertainty in dependence model-form and model parameters that result from small data sets. This approach begins by identifying, through Bayesian multimodel inference, a set of candidate marginal models and their corresponding model probabilities, and then estimating the uncertainty in the copula-based dependence structure, which is conditional on the marginals and their parameters. The overall uncertainties integrating marginals and copulas are probabilistically represented by an ensemble of multivariate candidate densities. A novel importance sampling reweighting approach is proposed to efficiently propagate the overall uncertainties through a computational model. Through an example studying the influence of constituent properties on the out-of-plane properties of transversely isotropic E-glass fiber composites, we show that the composite property with copula-based dependence model converges to the true estimate as data set size increases, while an independence or arbitrary Gaussian correlation assumption leads to a biased estimate.

Jiaxin Zhang and Michael Shields. "On the quantification and efficient propagation of imprecise probabilities with copula dependence." International Journal of Approximate Reasoning, 2020 (122):24-46.