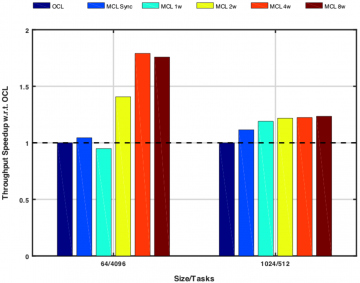 Hardware specialization has become the silver bullet to achieve efficient high performance, from Systems-on-Chip systems, where hardware specialization can be “extreme”, to large-scale HPC systems. As the complexity of the systems increases, so does the complexity of programming such architectures in a portable way. To address this issue, we introduce the Minos Computing Library (MCL), a novel runtime system aimed at providing a new level of capability for efficient parallel programming of extremely heterogeneous systems. MCL increases performance portability by transparently scaling applications to systems that feature heterogeneous resources and by enabling programmers to develop code on personal desktop computer and execute on large workstations or HPC compute nodes.

We analyze the overhead introduced by MCL over OpenCL when using similar hardware resources. The goal of this test is to evaluate MCL scheduling overhead, the parallelism exploited by the MCL workers, and the benefits of asynchronous execution. We conduct these tests on the GPU compute node platform, as this system only features one high-performance GPU, thus both OpenCL and MCL will use the same hardware resources.

This figure shows MCL performance with respect to OpenCL (first bar) in terms of throughput (tasks executed/s). In order to highlight runtime overhead we perform tests with small and medium tasks. Runtime overhead is relatively higher with small computational tasks where the amount of computation is not enough to amortize the cost of moving input data to the device, setup the kernel execution, and move output data back to main memory. In this case, MCL performs better than OpenCL by amortizing the overheads using implicit parallelism. For larger tasks, there is enough computation to amortize the cost of data movement. Although, the importance of overlapping data movement and computation is lower, MCL performance matches OpenCL, which indicates that the runtime overhead introduces is relatively small.