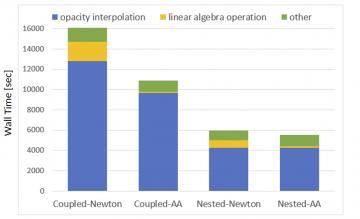 Computation time breakdown for the iterative solvers on a proto-neutron star deleptonization problem - the opacity interpolation time and the dense linear algebra operation time are the blue and yellow sections of the columns, respectively. The green sections represent the time spent on all other steps in the solvers. The results confirm that the nested Anderson-accelerated solver outperforms other solvers by reducing the opacity interpolation time with minimal dense linear algebra operations.

This work investigated efficient iterative solvers that allow for high fidelity simulations of neutrino transport in CCSN explosions, which are dominant sources of elements in the Universe. Due to the multiscale nature of neutrino transport in CCSN simulations, an implicit treatment of neutrino-matter interactions is desired, which results in stiff, coupled nonlinear systems to be solved in each time step. Efficient iterative solvers reduce the computation burden for solving these nonlinear systems. With the aid of these solvers, high fidelity CCSN simulations can be performed in a more realistic setting with more physical processes taken into account.

The iterative solvers aim to solve coupled nonlinear systems on the radiation moments and matter states (internal energy and electron fraction). We have considered two approaches to solve the nonlinear system - a coupled approach that directly solves the fully coupled system, and a nested approach that formulates the nonlinear system as a nested system with the outer system governing the matter states and the inner system governing the radiation moments. The nested approach is introduced to reduce the number of opacity evaluations/interpolations required in the solution procedure, and thus becomes more efficient than the coupled approach. Two iterative solvers - the Anderson accelerated fixed point solver and Newton's method - are implemented for both the coupled and nested approaches. We have tested the four solvers on relaxation problems with various collision rates and time steps, as well as on proto-neutron star deleptonization problems with post-bounce matter profiles from spherically symmetric CCSN simulations. Numerical results confirm that both nested solvers indeed require fewer iterations to converge (and thus less computational time) than the coupled solvers, due to the fewer number of opacity interpolations performed in the solution procedure. While the inner iteration count for the nested Anderson acceleration solver is higher than that observed for the nested solver based on Newton's method, the nested Anderson acceleration solver outperforms the nested Newton's method in terms of computation time. The nested Anderson acceleration solver requires more inner iterations to converge, but, due to the low cost per iteration, less computation time than the nested Newton's method, which is a consequence of the heavier dense linear algebra operations in Newton's method.

Neutrino-matter interactions play an important role in CCSN explosions as they contribute to both lepton number and/or four-momentum exchange between neutrinos and matter, and thus act as the agent for neutrino-driven explosions. Due to the multiscale nature of neutrino transport in CCSN simulations, an implicit treatment of neutrino-matter interactions is desired, which requires solutions of coupled nonlinear systems in each step of the time integration scheme. In this paper we design and compare nonlinear iterative solvers for implicit systems with energy coupling neutrino-matter interactions commonly used in CCSN simulations. Specifically, we consider electron neutrinos and antineutrinos, which interact with static matter configurations through the Bruenn 1985 opacity set. The implicit systems arise from the discretization of a non-relativistic two-moment model for neutrino transport, which employs the discontinuous Galerkin (DG) method for phase-space discretization and an implicit-explicit (IMEX) time integration scheme. In the context of this DG-IMEX scheme, we propose two approaches to formulate the nonlinear systems - a coupled approach and a nested approach. For each approach, the resulting systems are solved with Anderson-accelerated fixed-point iteration and Newton's method. The performance of these four iterative solvers has been compared on relaxation problems with various degree of collisionality, as well as proto-neutron star deleptonization problems with several matter profiles adopted from spherically symmetric CCSN simulations. Numerical results suggest that the nested Anderson-accelerated fixed-point solver is more efficient than other tested solvers for solving implicit nonlinear systems with energy coupling neutrino-matter interactions.