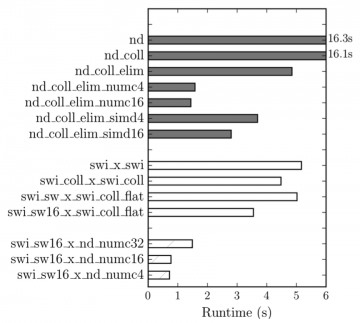 A team of researchers from Oak Ridge National Laboratory (ORNL) and the University of  Oregon investigated the performance of optimizations in ORNL’s OpenACC-to-FPGA framework on a novel FPGA device, an Intel Arria 10. They explored the relationships between optimizations, and the suitability of optimizations for different classes of algorithms.

The reconfigurable computing paradigm that uses field programmable gate arrays (FPGAs) has received renewed interest in the high-performance computing field due to FPGAs’ unique combination of performance and energy efficiency. However, difficulties in programming and optimizing FPGAs have prevented them from being widely accepted as general-purpose computing devices. In accelerator-based heterogeneous computing, portability across diverse heterogeneous devices is also an important issue, but the unique architectural features in FPGAs make this difficult to achieve. This work directly impacts these difficulties and issues by investigating and evaluating a high-level directive-based alternative approach for FPGA programming, the OpenACC-to-FPGA framework.