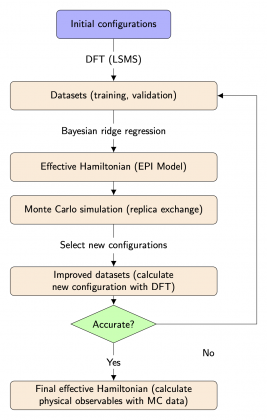 A diagram of the workflow of our data-driven method.

We develop a novel data-driven framework to construct effective Hamiltonian for the study of thermodynamics in HEAs using a data-driven approach. Compared to traditional DFT methods, the use of the linear-scaling LSMS greatly improves the calculation speed, allowing the use of a relatively larger DFT dataset and the direct evaluation of the configurations from Monte Carlo simulation. By using the effective pair interactions as the features and adopting the regularized Bayesian regression, the learned effective Hamiltonians demonstrate excellent robustness. By systematically adding data from the Monte Carlo samples, the representativeness of the datasets is greatly improved and the obtained effective Hamiltonian demonstrates very high predicted accuracy, with the test RMSEs as small as 0.019, 0.044, and 0.099 mRy respectively for MoNbTaW, MoNbTaVW, and MoNbTaTiW. These small errors are particularly critical for the study of low-temperature phases and order-disorder transition in thermodynamics.

Using the learned effective Hamiltonian, we investigate the evolution of the specific heats and short-range order parameters through canonical Monte Carlo simulation. For all the studied materials, we demonstrate that there are two major order-disorder transitions, one occurring near room temperature and another one at a higher temperature. We identify that the first transition is caused by W and Nb, while the second one is due to the other elements. We conclude that these results provide an explanation for the stress-strain relations found in the experiment. For example, the addition of V introduces strong pair interactions, which significantly increases the temperature of the second order-disorder transition. As a result, the abundance of second-phase precipitates in a wide temperature range reduces the ductility of the MoNbTaVW, as compared to MoNbTaW and MoNbTaTiW. Moreover, the first order-disorder transition in the materials also helps explain the experimental phenomenon of ductility increase after room temperature. These findings will provide useful guidance and insight to the future design of HEAs.