Comparing Time-to-Solution for In Situ Visualization Paradigms at Scale 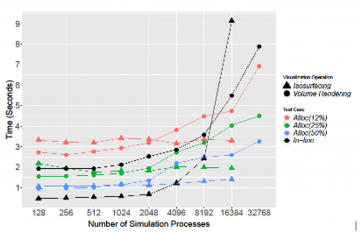 Total time per step to render and composite an image, both in-transit and in-line. The results from isosurfacing (triangles) and volume rendering (circles) are shown. Experiments are grouped by color (configuration) and connected by lines (concurrency sequence). (Image Credit James Kress)

A team of researchers led by Oak Ridge National Laboratory (ORNL) published a study quantifying the time to solution for different in situ visualization paradigms on varying algorithms, scale and sizes. We demonstrated that in-transit techniques are faster than in-line techniques for communication-bound visualization algorithms at large-scale, and that they are also faster for computation-bound algorithms with longer simulation cycle times.

It has traditionally been thought that in-transit visualization is more time intensive to use than in-line techniques due to the additional synchronization requited. We show that this is not always the case. In fact, it is possible to have in-transit techniques be than in-line methods at large scale, due to visualization algorithms running more efficiently on smaller allocations than a simulation.