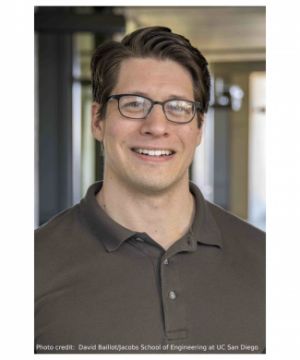 An immediately-preceding computational mechanics seminar introduced the motivation for and several applications of nonlocal models for damage and contact mechanics, and presented the case for combining meshfree and isogeometric numerical methods for such problems, illustrated by several examples. This content will be reviewed quickly for context, but the focus of the present seminar will be on several mathematical difficulties raised by that work:  - Are nonlocal phase-field fracture formulations compatible with time-explicit analysis? My proposal is to formulate a hyperbolic partial differential equation governing the damage field, with constraints on its coefficients following by analogy to mathematical literature on the telegraph equation. It may also be derived from microforce balance theory, by associating a kinetic-like energy to the damage field.

- How should nonlocal damage models be formulated on thin shells? The problem of gradient-enhanced damage is re-cast in the language of differential geometry, which provides the appropriate framework for deriving a shell theory. Because isogeometric analysis operates directly on manifold geometries, discretization follows naturally in that setting.

- Can nonlocal contact formulations include friction in a way that preserves objectivity and angular momentum balance? Yes; the concept of nonlocal Taylor extrapolation is introduced for this purpose, and may prove useful elsewhere.  Several open mathematical questions for future work on nonlocal damage and contact modeling will also be posed.