Our climate has changed. How do we learn to live with extreme events? 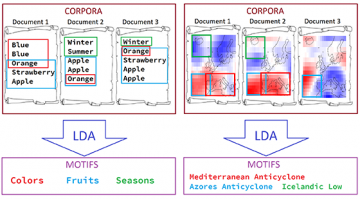 Schematics explaining the use of LDA for climate data: words are replaced by pixel values, motifs correspond to meteorological objects (cyclones and anticyclones).

From weather dictionaries to AI physics, new approaches try to anticipate the next catastrophic flood, tornado, or hurricane.

By some measures, climate change is in the past.

“Multiple lines of evidence strongly support the finding that anthropogenic greenhouse gases have become the dominant driver of global climate warming observed since the mid-twentieth century,” reports the revised Statement on Earth’s Changing Climate adopted by the Council of the American Physical Society this November—representing the collective voice of more than 50,000 members.

Important efforts to stall the consequences of future climate change continue. But some researchers are asking a different question: How can society become more resilient in an already-warmed world?

At the 2022 APS March Meeting, scientists will share new findings on learning to live with climate change—and the extreme events that follow in its wake.