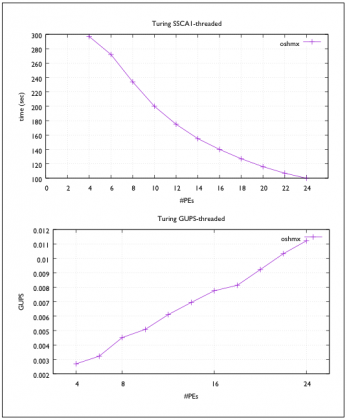 The paper was accepted and presented at the workshop, which described the current set of benchmarks and mini-applications/kernels available in the OpenSHMEM Benchmark (OSB) suite. The paper describes the intended use of the suite, discusses benchmark behavior, and provides details on enhancements for the OpenSHMEM specific version of the codes.  The paper also details on the three benchmarks that have a multithreaded variant (Graph500, SSCA1 and GUPS), which leverages the multithreaded support added in the latest OpenSHMEM v1.4 specification.

The assessment of application performance is a fundamental task in high-performance computing (HPC). The OpenSHMEM Benchmark (OSB) suite is a collection of micro-benchmarks and mini-applications/compute kernels that have been ported to use OpenSHMEM. Some, like the NPB OpenSHMEM benchmarks, have been published before while most others have been used for evaluations but never formally introduced or discussed. This suite puts them together and is useful for assessing the performance of different use cases of OpenSHMEM. This offers system implementers a useful means of measuring performance and assessing the effects of new features as well as implementation strategies.  The suite is also useful for application developers to assess the performance of the growing number of OpenSHMEM implementations that are emerging. In this paper, we describe the current set of codes available within the OSB suite, how they are intended to be used, and, where possible, a snapshot of their behavior on one of the OpenSHMEM implementations available to us.  We also include detailed descriptions of every benchmark and kernel, focusing on how OpenSHMEM was used. This includes details on the enhancements we made to the benchmarks to support multithreaded variants.  We encourage the OpenSHMEM community to use, review, and provide feedback on the benchmarks.

The OSB suite is available at: https://github.com/ornl-languages/osb